Her Journey – Listen to Joy story

Joy is the wife of Lael and has been extremely supportive of her husband through the process of both the radical prostate surgery and the Penile Implant surgery.

Joy is very pleased with the outcome of the Penile Implant.

Unable to watch Joy’s story? Read her story below

Does your sex life end after prostate cancer?

Well it did end for a while until they all found the implant. Then it started all over again. But things changed. It had changed prior to having the prostate surgery anyway.

At first he wanted me to use the little pump in the scrotum.  I found that I couldn’t do it without it slipping through my fingers.

That was uncomfortable for him so I didn’t do that and but now  it’s been wonderful. It’s different but because it’s not an automatic function for male. It’s something he can program himself really for as long as he wants or for you know as short as he wants so it’s different in that aspect but it all works well.

How do you discuss erectile dysfunction with your partner?

If my husband lost his erection and he couldn’t sort of consummate or finish having sexual intercourse well that was the end for that time that then maybe next time it would be different and there are ways.

I can’t go into the details but there are ways and means of approaching your sexual relationships with your partner that helped to increase the chance of success with sexual intercourse. You can be a bit more adventurous with  how you approach what you do which is what I did I guess and often with success

I had my own ways of working with Lael’s issues with erectile dysfunction  but he obviously wanted to have the injections.

They were the answer weren’t they and with the implant well I haven’t that’s different again how we approach that but it has a lot to do with how your relationship your relationship really between you the relationship and the amount of sort of intimacy and talking that you can achieve between one another obviously if you really don’t value your partner’s sexual well-being there wouldn’t be a conversation so that’s it’s really intimacy in love.

Was it important to attend consultations with your partner?

I didn’t go to every appointment but I certainly went to an appointment prior to the implant with Lael. We went to see the doctor and that was very valuable for me just learning more about how it was going to be placed inside his body, where it would be placed and what it would do, how it would function so that he could have basically have an erection,…so yeah it was very important for me because it’s different hearing the doctor talk about it, than hearing my husband talk about it. I could also ask quite different questions so that was good.

Did your consultation with the urologist help you to manage your expectations?

I didn’t have any great expectations other than I thought it would restore Lael having a penis and it did.

Are you happy with the results of the penile implant?

Yes very happy indeed. I’m very I’m happy with the results of the penile implant. I think because of its benefited Lael so much and has benefited us as a couple. So  it’s benefitted his well-being and that that impacts on us. So yes It’s been very good.

How has the procedure affected your relationship?

It was it’s 12 years since Lael had the procedure 2007. II’ve had a while to grow accustomed to the implant eight years it has benefited us greatly.

I mean we can have comfortable sexual intercourse without him losing his erection. In fact he has to take it down like he and it’s different from what it was. In that he doesn’t have the same ejaculation or orgasm as he used to but there’s still an orgasm feeling that he has because I know there is. I can tell and he can tell as well. There is some a lot of pleasure associated with the penile implant between us that which would we would not have if he hadn’t had the penile implant. So he has been very beneficial.

His Journey – Listen to Edward’s story

Edward is a 65 year old man who had a radical prostatectomy with a robotic ... 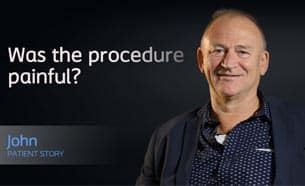 Patients tell us about their operation

Many men feel embarrassed, think that erectile dysfunction is just a normal part of ageing or believe ... 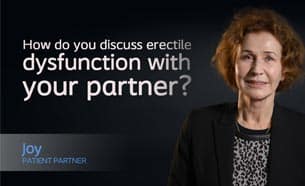 Her Journey – Listen to Joy story

Joy is the wife of Lael and has been extremely supportive of her husband through ...

Password Recovery
Please enter your email address. You will receive a link to create a new password via email.

Welcome
Designed with a physician's needs in mind; an easy to access library of educational resources.
In order to give you access to the resources Coloplast will need to process your personal data. For information about Coloplast’s processing of my personal data and my rights please see the privacy notice.